Zimbabwe Coup: Dissolution of an Era 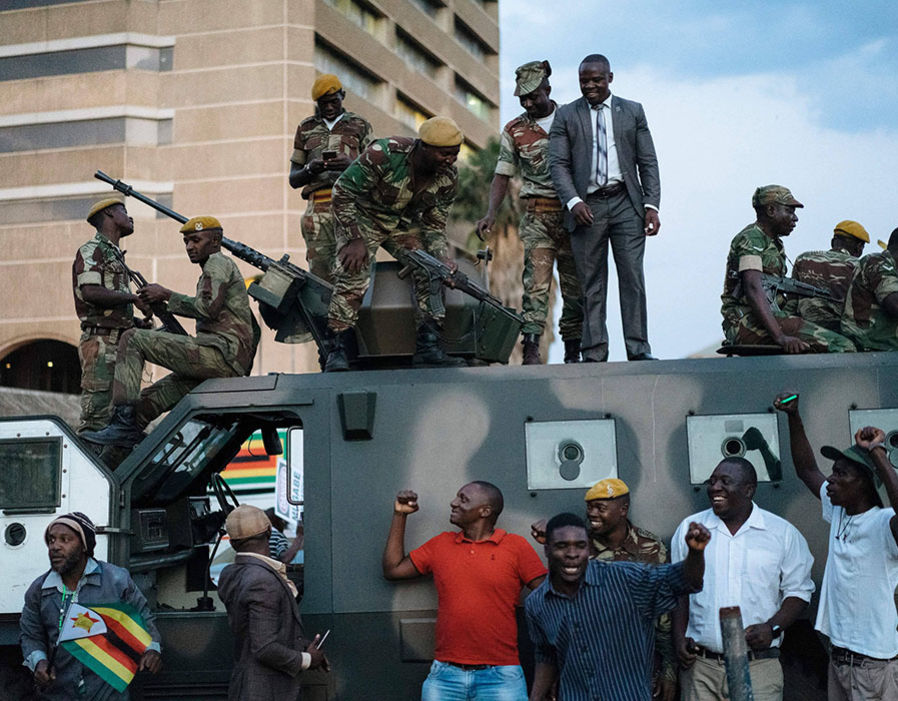 On November 15, the army in Zimbabwe seized control of the state’s TV, acting to target what it calls criminals surrounding President Robert Mugabe. Armored vehicles were deployed near parliament and government buildings (link). The army was seeking to “pacify a degenerating, social, and economic situation” in the country. The army denied any participation in a coup and promised President Robert Mugabe and his family were “safe and sound and their safety is guaranteed.” While Mugabe has long ruled Zimbabwe, there was a precedent for his removal from within the party’s history. In the Liberation war (1964-1979), Zanu PF (political party Mugabe was part of) was led by Mr. Sithole, the found of Zimbabwe’s ruling party. The military wing during that time got to a point where they thought he was treating the party as his own personal property, so they removed him. There are parallels to what they’ve done to Mugabe (link).

Although the army denies any participation in a coup, saying, “We wish to make it abundantly clear that this is not a military takeover of Government. What the Zimbabwe Defense Forces is doing is to pacify a degenerating political, social and economic situation in our country which if not addressed may result in violent conflict.” The military also made a statement saying they are only targeting “criminals around Mugabe who are committing crimes that are causing social and economic suffering in the country in order to bring justice.” Who those “criminals” are is unclear, but Mugabe’s wife, Grace Mugabe, is likely to be the target. In August, Grace Mugabe was accused of assaulting a 20-year-old South African model Gabriella Engels at a hotel in Johannesburg. While Mugabe denied the accusations, she also claimed diplomatic immunity and returned home on August 20 (link).

On Nov. 6, President Mugabe suddenly fired one of his two vice presidents, Emmerson Dambudzo Mnangagwa. The firing was viewed as clearing the way for his wife’s ascension to power. Meanwhile, Grace Mugabe has been consolidating power and is the likely successor to her husband. Her rise to power has not sat well with the military.

Although the military takeover seems sudden and abrupt, it has been slow-cooking for several months. Zimbabwe slipped past the radar of intel because it does not have an armed opposition to the central government and it is not a base for any insurgent groups. It has, however, faced many economic challenges, the murder of several white landowners as a result from Mugabe’s land reform proposals, and the seizure by squatters of many more white-owned farms. Those actions by Mugabe led to U.S. and European Union sanctions against Robert and Grace Mugabe, including an arms embargo, which drove down Zimbabwe’s economy (link)

Now looking to more recent and pressing history, in August, President Mugabe announced he would not prosecute the killers of those white farmers during the same week Grace was accused of assault in South Africa. During the same week, the government moved to crackdown on dissent on social media, arresting a 25-year-old American girl for satirical tweet, which the government of Zimbabwe deemed was intended to lead to the overthrow of the government (link).

Mugabe is a stereotypical African strongman. According to the CIA World Fact Book, Mugabe “ignores international condemnation, Mugabe rigged the 2002 presidential election to ensure his reelection.” In 2008, Mugabe nearly lost to the opposition, Morgan Tsvangirai, but following a campaign of violence leading up to a runoff election, Tsvangirai withdrew, saying it was all a sham (link).

The likely result from the coup in Zimbabwe will include President Mugabe being formerly removed from office or he will resign. The ousted VP Mnangagwa returned to the capital, Harare, to “take control of the country’s government,” and Mugabe will agree to step down in exchange for allowing Grace to leave the country for “safe haven.” (link)